What is a Pilonidal Sinus?

Pilonidal sinus is a term derived from the Latin language and means ‘nest of hair’. It is an acute or chronic infection in the skin and subcutaneous of the natal cleft (intergluteal region) in most cases. The disease had a high incidence during World War II and it was named the “Jeep riders” disease as many soldiers were affected because of the bumpy rides causing irritation and trauma over the sacrococcygeal region. Risk factors include obesity, hairy habitus, repetitive trauma to the natal cleft, and family history of pilonidal disease. The latter may be associated with a higher risk of recurrence after surgical treatment. 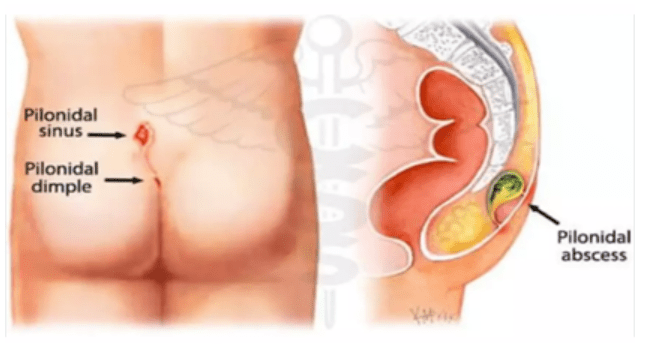 What is the cause of Pilonidal Sinus?

Although many theories have tried to explain the origin of pilonidal sinus, the obstruction of a hair follicle by follicular hyperkeratosis seems to play a central role. This will lead to the formation of a pilonidal cyst that subsequently becomes infected and opens up onto the skin surface forming a sinus. The infection may be extensive forming various tracts and multiple skin openings (pits). Broken hair is sucked in the cavity and further contribute to chronic inflammation. The disease is more common in hairy people. Another theory would support the pathogenetic mechanism that loose hair may penetrate the skin and cause a foreign body reaction with subsequent infection and formation of pits. Initial theories of congenital origin have been abandoned.

A pilonidal cyst can be appreciated as a subcutaneous indurated lump that is usually tender on palpation and may be fluctuant and pointing (abscess). When an established pilonidal sinus is present, the appearances of the pits are quite typical. These may discharge serous, bloody, or purulent fluid. Sometimes, broken matted hair is seen in the opening. Cavities may be large and extend downward close to the anal sphincter complex and laterally over the gluteal region. The patient may complain of a history of several infections in the area that subsided with antibiotic treatment or of a history of pain and discharge. 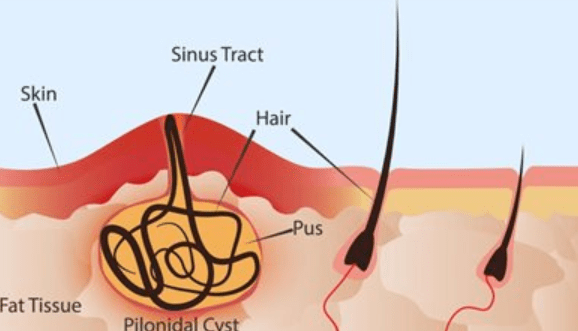 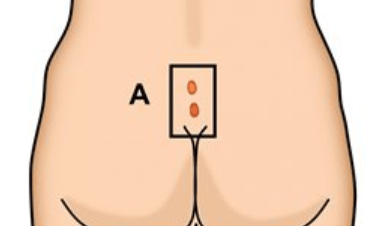 Several procedures have been described for pilonidal sinus treatment raging from hair removal, ablation of the sinus tract and cavity, simple excision, or excision with flap reconstruction in recurrent and complex cases.

Operative excision of the pilonidal sinus is the traditional standard technique and can be divided into two main approaches: excision and primary closure and excision with healing by secondary intention. Multiple randomized trials in pilonidal sinus treatment have demonstrated that primary closure leads to faster healing and early return to daily activities and work. Secondary intention healing requires multiple visits for change of dressings and consequently need time off work. The downside of the primary closure approach is a higher recurrence rate (8.7% vs 5.3%) as reported in a Cochrane systematic review.

Excision with secondary healing was found to reduce the recurrence rate by 35%. An interesting finding is that there seems not to be a difference in the rate of wound infections between the two approaches and infection does not seem to lead to long-term recurrences. The benefit of adding marsupialization of the cavity or placement of negative-pressure wound devices are still controversial. One key technical point that should be consistently adopted when performing excision and primary closure, is to use techniques that allow for the wound closure to be off-midline. The popular Bascom and Karydakis techniques that are based on this concept have reported the lowest recurrence rates. The use of drains after primary closure has been shown in some studies to be associated with lower rates of dehiscence and faster healing.

This recent ‘painless’ technique for pilonidal sinus treatment has shown to have a very low recurrence in the order of 3% at 12 months. The procedure consists of a special rigid endoscope that is inserted into the pits of the pilonidal sinus to access its cavity. The video allows us to identify any hair present and remove it with forceps. Also, multiple tracts can be appreciated and the granulation tissue and epithelium cauterized. The continuous flow of glycine-mannitol solution allows for a washout of the cavity. A brush can be inserted through the endoscope for curettage. The pits are excised close to the margins and healing is achieved within 1 to 2 months. A multicenter study of 250 cases with chronic pilonidal sinus showed a healing rate of 94% with only 5% of recurrence. There was no difference between primary or secondary operations. A randomized trial comparing endoscopic treatment with the Bascom cleft-lift technique reported a faster recovery, fewer complications, less pain, and a higher satisfaction rate in the patients undergoing video-assisted surgery.

Laser ablation (PiLaT, SiLaT) is a technique that is also part of the ‘painless’ minimally invasive techniques for the treatment of pilonidal sinus. The pits are excised and the pilonidal sinus cavity is curetted and washed. Laser energy is then applied with a 1470 nm wavelength, 8 W power, and 100 J per cm. Sterile ice is immediately applied to cool down the area. Results have been similar to EPSIT with recurrence rates <5%.

In the absence of an abscess, a simple pilonidal cyst has no pits or external orifices. In this case, there is no possibility of using endoscopic techniques or laser, and the only pilonidal cyst treatment possible is surgical excision.

Most surgeons carry out Pilonidal Sinus Treatment in Dubai. However, a surgeon with extensive experience in the newest techniques is required. Dr. Antonio performs painless endoscopic and laser surgery for pilonidal sinus in Dubai with the lowest recurrence rates.